If you use many gigabytes of data each month, Ting isn’t for you – but if you’re a low-data user, Ting is a fantastic choice that’s a fresh of breath air – great customer service, easy to understand usage tiered pricing, and flexible device compatibility with both T-Mobile (GSM) and Sprint (CDMA) networks.

I originally found Ting when I was looking for an inexpensive phone service for my secondary/business phone. I needed a smartphone, since I have to use WiFi Calling at home (the whole town I live in has shoddy cell service on all carriers, and as soon as you pull into my apartment complex, all providers show No Service).

The cool thing about Ting is that you pay for what you use, rather than picking a plan up front. While their higher usage tiers aren’t that competitive, most people that don’t use a ton of minutes, texts, or large amounts of data, can save money with Ting.

Most people care about one thing and one thing only when it comes to cell service, and that’s the price. Check out Ting’s latest rate sheet on their site directly here, but I’ve included a screenshot of their current pricing at the time of writing (July 2016):

Basically, there is a $6/month line fee, plus any usage, and then taxes and fees. My bill ranges from $16-32/month, and that’s for two devices (a Sprint tablet that’s pretty much never in a service area, and my business phone, a Samsung Galaxy S5).

Most people would rather be run over than call their phone carrier or internet provider, and that’s where Ting is different, in a good way.

Gone are the long hold times and outsourced idiots that read off a script in broken English. Ting just has 100% in-house staff, with no complicated menus – just knowledgeable, competent staff members that don’t make you want to throw your phone out the window. I’ve never waited for more than a minute when contacting Ting, and every time, the first person is able to help me.

And they don’t just know what they are doing – they actually care about having you as a customer. At least, that’s the impression I get every time I contact them, either via their convenient online live chat, or calling them.

Ting is an MVNO, or mobile virtual network operater, which means they don’t run their own wireless network infrastructure, which is a hugely expensive proposition. Instead, they basically resell other carriers.

Ting started out in 2012 reselling Sprint’s CDMA network. Unfortunately, CDMA is a pain because it’s US-only, you can’t use unlocked devices (whatever phone you have to buy has to be whitelisted on Sprint’s network), and you have a limited choice of devices. Oh, and I’ve never met a happy Sprint customer. As such, I don’t suggest you waste your time getting CDMA service, unless you already have a Sprint phone in hand that you want to move over.

In 2015, Ting added a GSM network to operate alongside their CDMA service. They partnered with T-Mobile for this service, which is a great choice, because while T-Mobile’s coverage area doesn’t quite have the reach of AT&T in some areas, it doesn’t suck by any means, and if it’s good enough for me (an impatient tech enthusiast whose business is technology) then you won’t have any problems.

The best part about Ting’s GSM service, is if you have a compatible phone, T-Mobile is the only carrier in the US that does WiFi Calling (well, I do believe that all new iPhones support it natively, but don’t quote me on that as I wouldn’t touch an Apple device with a 10ft pole). How does WiFi Calling work? Well, as long as you’re connected to WiFi at home, at work, in a public place, or through  any other network, you can use the phone and texting functions of your phone like normal, without ever touching the tower. And since WiFi is pretty much everywhere, with T-Mobile/Ting GSM, you have coverage pretty much everywhere.

Data speeds are the same as they would be if you went directly with T-Mobile or Sprint for GSM and CDMA respectively. I have only used my Sprint tablet through Ting CDMA a handful of times, but when i have used it, data speeds through 4G LTE were just fine. For my phone, I switched from AT&T to T-Mobile and Ting GSM, and while 4G LTE speeds are generally great, T-Mobile’s data speeds aren’t as consist as AT&T – from one spot to the next, performance fluctuates greatly, though this inconsistency is really only noticeable when in a car.

What I’m trying to say is go with T-Mobile through Ting’s GSM offering, and don’t look back 🙂 Remember that you can use any new or used unlocked or T-Mobile branded GSM phone with Ting GSM, simply by putting in the SIM chip, and maybe entering the APN settings (link to Ting’s help center)

Devices – Buy from Ting vs BYOD

If you are going to go with the Sprint-powered Ting CDMA service, you’re an idiot, unless you already have a working Sprint branded smartphone/tablet.

In terms of the GSM service, you can use any unlocked GSM device, or any T-Mobile branded device. Ting does sell devices directly at ting.com/shop, but I don’t see any clear advantage of buying from them besides simplicity – you can often find the same devices for cheaper (whether new or refurbished) on Amazon (recommended) or eBay – so be sure to shop around. While the one device I ordered from Ting (a Nokia Lumia 635) was an actual T-Mobile branded device, over live chat, Ting told me that devices purchased from them may or may not be T-Mobile branded devices or generic unlocked models.

What’s BYOD? Bring Your Own Device basically means you’ll order a SIM from Ting and put it in a phone that you provide yourself, whether it’s one you already had or one you purchased elsewhere. Do keep in mind that while you can use any phone from any other GSM carrier (such as AT&T), you need to get the unlock code for the device prior to doing so.

It’s frustrating when a company doesn’t give you good tools to manage your account and see your usage. Ting does a wonderful job here, with a clean and intuitive website and customer portal. Ting’s interface is easy enough for even the most un-tech-savvy customers to navigate.

Ting has a great feature called Usage Alerts. You can set up custom rules when certain amounts of a resource (minutes, messages, data) etc are used, and either disable it, notify you, etc. This is very handy so you don’t accidentally end up with a huge bill at the end of the month. 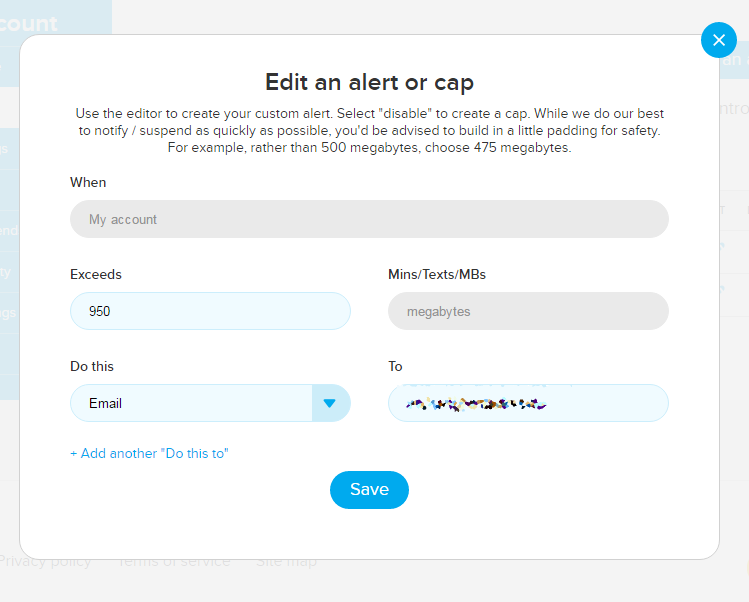 Ting‘s unbeatable customer service, flexibility, post-paid pay-as-you-go rates, and easy of use make Ting a great option for many people – though it’s clearly not designed for heavy consumers of data.

So, check out Ting today! If you use my referral link (https://z3nb4q4q21e.ting.com/) both you and I get $25 account credit – that’s about a free month of service for each of us. If you’re not comfortable using affiliate links, I get it, but it’s a win-win for both of us – and rest assured that this review is true to my experience using the service and I’m not saying nice things just to earn a couple bucks.

One thought on “Ting Mobile Review”